I’ve been contemplating on the idea of creativity for a long time and I recently encounter a book titled, The Artist Way by Julia Cameron. In this book, she details ways to overcome a creative block. What I really liked about the book was the author’s description of creativity as a fountain that needs to be filled and nourished constantly. I decided to try some of the activities out for a week or two. I will revisit the exercises soon. I must admit that I did not try any of them long enough to see any significant result, but some of these may be helpful to you. I have compiled a mixture of things that I personally do, along with some of the ideas of the book that I felt were useful.

If anyone has any suggestions, please feel free to post them in the comments. I would love to hear some mores suggestions. What things do you do for inspiration or to get your creative energy flowing?

I received this book as a gift and decided to write a review of it just in case anyone is interested. As implied by the title, the book goes over the mental process experienced by many artists including fears of rejection, the need for acceptance, assumptions, the role of academics, and finding your own style or voice. This short book really does a good job at getting to the point as to why many artists quit and what makes an artist continue. it begins with a brief history of the idea of the “artist” and what that means in the 21st century.  It avoids going over the marketing and economic factors that place constraints on the artist, but instead focuses on the idea of making art for the pursuit of meaning and pleasure.

One of the most essential points of the book is the idea that art is centered on the experience of each individual and that each artist has everything they need to make art that is relevant and unique to them–even if artists draw our inspiration from other artists. Overall, I recommend this book for anyone who is looking for a short overview of the struggles faced during the art making process or are looking for some inspiration. 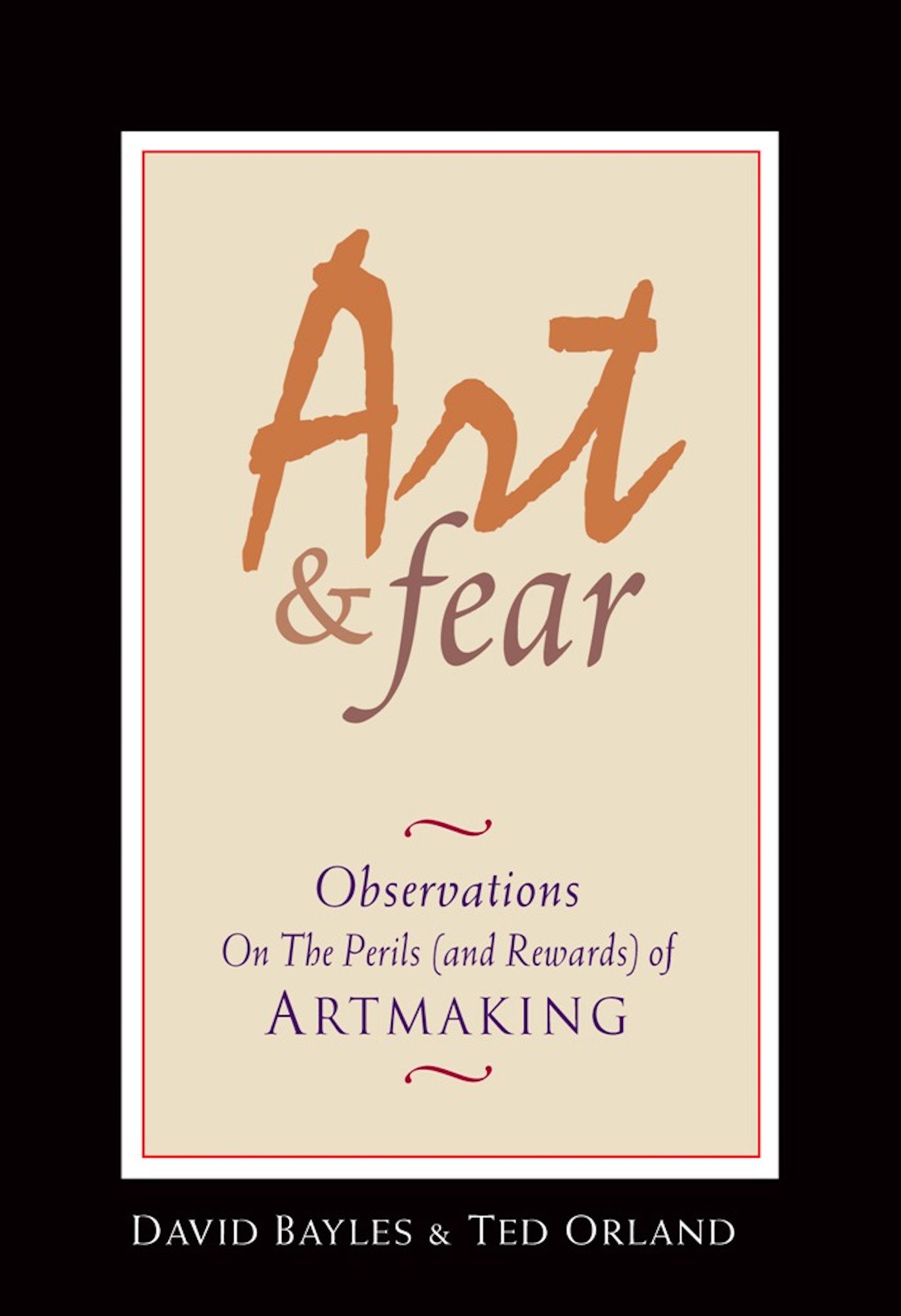 One of my professors sent me the link posted below, which I found to be insightful and entertaining. I have been reading so much about Hemingway lately and it is interesting to learn about all of the artists (Cézanne, Miró, Homer), and writers who influenced him. Just wrote my paper on Hemingway’s use of realism and naturalism in his work. I have written a couple of short stories, that I may share soon, but as an artist, I feel that I learn so much from writers. Stephen King and Hemingway have much in common as American authors who took realism to another level.

A Little About the Author:

Hemingway really begins to take form as a writer by working with the Kansas City Star where he learned to write well through a basic set of rules he was given. These rules are still regarded highly today. Stephen King’s “On Writing,” for example, introduces the reader to the same set of rules he acquired and are very similar to Hemingway’s rules. It has been said that Hemingway was influenced by many movements of art. As a romantic, he knew that many of the deepest feelings he felt and wrote about were universal and so should transcend our current time. Maybe he was not that aware of this in his work. He was a realist because he depicted everything he saw without adding any fluff, like a historian. He was an impressionist because he knew that no person could objectively define a thing in itself, but could only acquire knowledge of a thing through certain experiences with that very thing. He captured naturalism in his work with his belief that every person should come to know a thing by absorbing the material environment around that thing. He cannot help hold to a modernist’s perspective because he is a product of his age—Gertrude Stein knew this about Hemingway very well.  He learned from the contemporary writers of this time, Sherwood Anderson, Ezra Pound and Gertrude Stein. His imagery makes you feel as you were breaking bread with him.   Hemingway’s writing relies “. . .on simple structures and diction to focus our attention on concrete details that paint a picture in primary colors of an American landscape” (Ulrich). Hemingway, like Stephen King, is an artist.

Gertrude Stein once sated that Hemingway is like a  “modern museum” because he drew from old work by studying the classics as a child and captures themes that are timeless. He is modern because he was a part of the “the lost generation,” a generation that had lost the belief that there is an objective set of truths that one should hold. In other words, he is an author that has brought together many forms of art into one, and we could all pick a part of his work and trace any part back to something old,  but yet that part is still relevant. I really love this idea and it has certainly influenced the way I think about my own art.

Naguib Mahfouz’s novel Arabian Nights and Days powerfully depicts a variety of characters, drawn from the classic tales of the Arabian Nights, whose relationships with one another are entangled in a web which they are unable to escape. This web is designed with a purpose, but men must be able to work their way through the web and struggle for their existence. Existentialism, as defined by the French philosopher Jean-Paul Sartre, flourished two decades after World War II and found its way into the Arab world during the 1960’s (Bramann). Influenced by Postcolonialism, the Arab world encountered many of the same problems defining man and existence as the West (Di-Capua). It is therefore not surprising that Mahfouz’s novel is embedded with existentialist themes and can be viewed as a written response to those seeking to define not only what it means to be Arab, but what it means to exist.

The idea that man is responsible for his or her action is not alien to the Arab intellectual tradition. According to Yoav Di-Capua’s article “Arab Existentialism: An Invisible Chapter in the Intellectual History of Decolonization,” Arab existentialism arose primarily as a result of a failed attempt at national liberation through influence of philosophers such as, “Sartre, Camus, Beauvoir, Guevara and Arthur Kostler” (1084). All of Mahfouz’s characters demonstrate a clear connection to these thinkers by defining themselves through their own actions rather than relying on the idea of fate, or some type of determinism.

Sartre’s vision of existence, for instance, closely resembles that of the sultan Shahriyar. In the beginning of the novel, he is described as a corrupt man who is responsible for the deaths of innocent people and the beheading of virgins. According to Shahrzad, his second wife, he is arrogant and immoral (Mahfouz 4). Although he is characterized as immoral by some, he himself begins the process of provoking existential thought with the words “Existence itself is the most inscrutable thing in existence” (Mahfouz 2). According to Sartre, existence must precede the essence of a thing, so that human existence begins subjectively (Sartre 2). Once the idea that one’s life is subjectively defined is accepted, one can proceed to defining oneself.

In Sartre’s “Existentialism Is a Humanism,” he uses the allegory of an artisan creating a paperknife to show how a definition of a thing can precede the existence of a thing and how humans, if created by God, are created with a purpose and with an intention in mind. However, men must define themselves according to their own will. Sartre further states that “man is nothing else but that which he makes of himself” (3). Regardless of whether or not God exists, man is not only responsible for their own lives, but also “is responsible for all men” (4). This means that every action taken by man is in some way defining an aspect of mankind.  Shahriyar, through time, is able to come to terms with himself. Shahrzad’s powerful tales works to reveal his errors which causes him to change his corrupt ways. Shahriyar is a representation of the consequences of realizing one’s reality, which is that that one’s life is not set or fated but is being continually defined in the present moment through a process of actions taken by oneself.

The character Sinbad, also faces the same struggle with finding meaning in his life and faces his own existential crisis. While conversing with some of his friends and acquaintances at a café, Sinbad reveals his dissatisfaction with life and states that he wants to “throw [himself] into the arms of the invisible” (Mahfouz 9). Sinbad sets off on a voyage where he encounters hardship, and is finally told by the sheikh that he must face himself, and death (Mahfouz 219). Sinbad’s call to the sea, in other words, will not be pacified until he is at peace with himself.

Sanaan al-Gamali is another character who represents an aspect of existentialism. Sanaan is a man who is unable to take responsibility for his actions, which inevitably leads him to his death. Like Sinbad, Sanaan is overcome with anxiety. This anxiety, which is provoked by a genie, causes Sanaan to rape and murder a 10-year-old girl. The genie, who stirs Sanaan, and tells him to kill Ali al-Saloulli the governor, who is known to be corrupt. In this way, the genie is attempting to get Sanaan to see the error of his ways and offering a chance at redeeming himself. Sanaan, upon killing the governor, pleads with the genie Qumqam to save his life and instead is told that “he who does good is not troubled by consequences” (Mahfouz 28). The intentions of the genie, although not entirely noble, causes Sanaan to confront himself regardless of what the consequences were.

Mahfouz’s novel provides an effective existentialist commentary on life and culture using characters familiar to the Arab world. His representation of Shahriyar, Sinbad, and Sanaan, provides the reader with clear examples of the consequences to leading a life that is corrupt, undefined, and irresponsible, but most importantly, without the search for truth. Jean-Paul Sartre’s view of existence clearly fits Mahfouz’s model for how man should seek to find meaning in a world that is corrupt and apparently meaningless. Like Sinbad, who is thrown into the sea, “the moment that [man] is thrown into the world he is responsible for everything he does” (Sartre 5). One, in essence, begins to exist once one is able to take responsibility for one’s own actions.